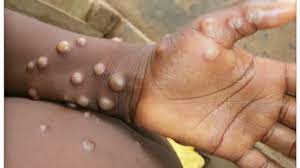 Monkeypox is a rare infection that’s mainly found in parts of west or central Africa. There have been some recent cases in the UK, but the risk of catching it is low.

How you get monkeypox

Monkeypox can be caught from infected rodents (such as rats, mice and squirrels) in parts of west and central Africa.

You can catch monkeypox from an infected animal if you’re bitten or you touch its blood, body fluids, spots, blisters or scabs.

It may also be possible to catch monkeypox by eating meat from an infected animal from central or west Africa that has not been cooked thoroughly, or by touching other products from infected animals (such as animal skin or fur).

Monkeypox can also spread from person to person through:

Monkeypox in the UK

Although more people have been diagnosed with it recently, only a small number of people in the UK have had monkeypox and the risk remains low.

You’re extremely unlikely to have monkeypox if:

Anyone can get monkeypox. Some cases have been diagnosed in men who have sex with men, so it’s particularly important to be aware of the symptoms if you’re a man who has sex with men.

If you get infected with monkeypox, it usually takes between 5 and 21 days for the first symptoms to appear.

The first symptoms of monkeypox include:

A rash usually appears 1 to 5 days after the first symptoms. The rash often begins on the face, then spreads to other parts of the body. This can include the genitals.

The rash is sometimes confused with chickenpox. It starts as raised spots, which turn into small blisters filled with fluid. These blisters eventually form scabs which later fall off.

The symptoms usually clear up in a few weeks.

Monkeypox is usually mild and most people recover within a few weeks without treatment.

But as the infection can spread through close contact, it’s important to isolate if you’re diagnosed with it.

You may be asked to isolate at home if your symptoms are mild.

If your symptoms are severe or you’re at higher risk of getting seriously ill (for example, if you have a weakened immune system), you may need to stay in a specialist hospital until you recover.

You may be offered a vaccination to reduce the risk of getting seriously ill.

Things you can do to avoid getting monkeypox while travelling

Although monkeypox is rare, there are things you can do to reduce your risk of getting it while travelling in west and central Africa.